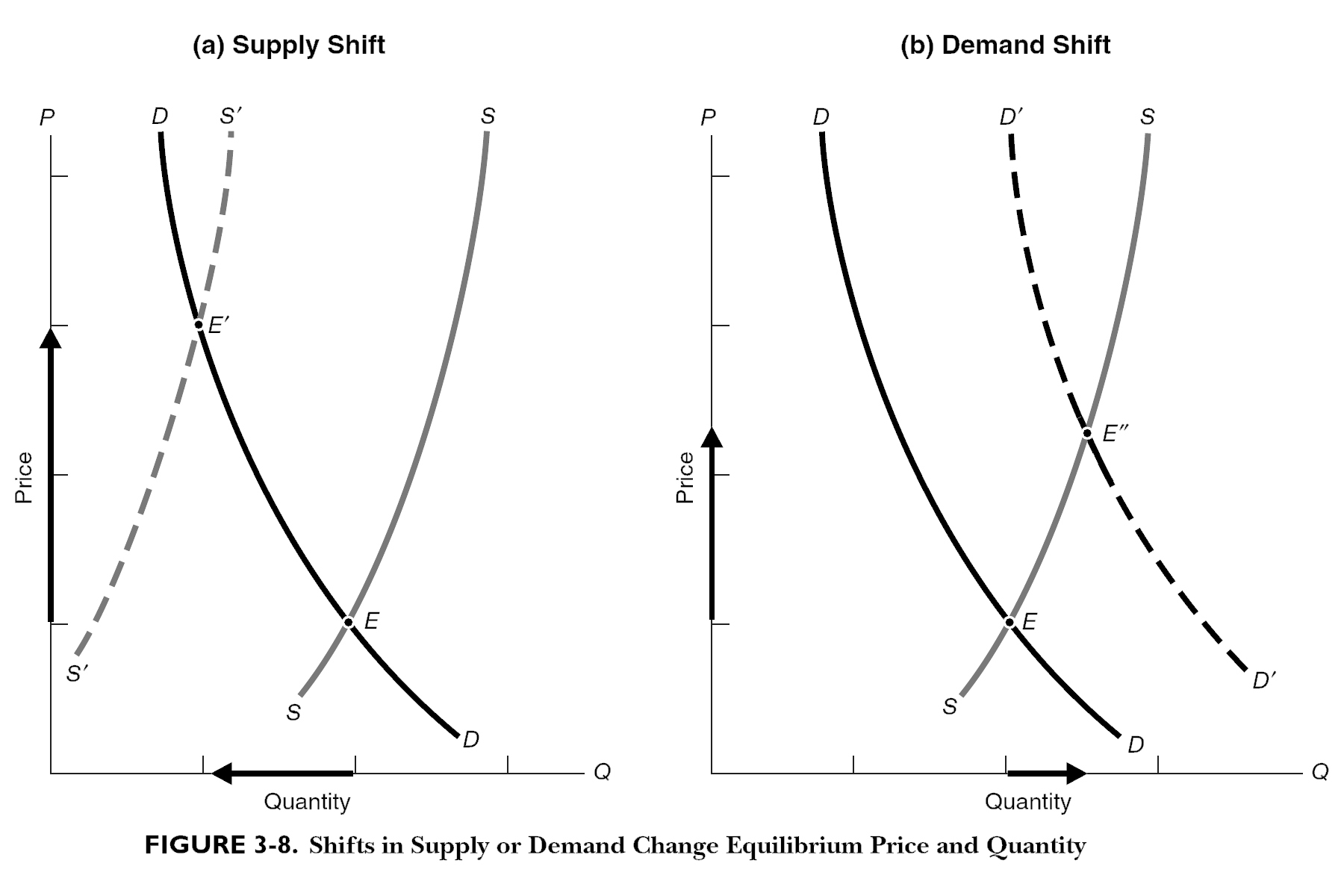 If you understand how supply and demand work, you have gone a long way toward understanding a market economy. — Paul A. Samuelson and William D. Nordhaus, Economics 19e, McGraw-Hill Irwin 2010, p.45

Here again we can see how absolutely nothing can be explained by the relationship of demand and supply, before explaining the basis on which this relationship functions. — Karl Marx, Capital Vol 3, Chapter 10, p.282

(1) The analysis of supply and demand shows how a market mechanism solves the three problems of what, how, and for whom. A market blends together demands and supplies. Demand comes from consumers who are spreading their dollar votes among available goods and services, while businesses supply the goods and services with the goal of maximizing their profits.

A. The Demand Schedule

(2) A demand schedule shows the relationship between the quantity demanded and the price of a commodity, other things held constant. Such a demand schedule, depicted graphically by a demand curve, holds constant other things like family incomes, tastes, and the prices of other goods. Almost all commodities obey the law of downward-sloping demand, which holds that quantity demanded falls as a good’s price rises. This law is represented by a downward-sloping demand curve.

They clarify their notion of “demand”:

Our discussion of demand has so far referred to “the” demand curve. But whose demand is it? Mine? Yours? Everybody’s? The fundamental building block for demand is individual preferences. However, in this chapter we will always focus on the market demand, which represents the sum total of all individual demands. The market demand is what is observable in the real world.

The market demand curve is found by adding together the quantities demanded by all individuals at each price. – Paul A. Samuelson and William D. Nordhaus, Economics 19e, McGraw-Hill Irwin 2010, p.48

(3) Many influences lie behind the demand schedule for the market as a whole: average family incomes, population, the prices of related goods, tastes, and special influences. When these influences change, the demand curve will shift.

The claimed law – incomes determine demand – is false, but corresponds to something observable: poverty of the masses.

Together: demand is a function of what something costs and how much money people have to spend on it. As a theory of prices this is absolutely useless. This also tells a very different story to “dollar votes”, the limitation of these votes, the poverty of those sovereigns, is the key thing both in thesis 2 and 3.

B. The Supply Schedule

(4) The supply schedule (or supply curve) gives the relationship between the quantity of a good that producers desire to sell—other things constant—and that good’s price. Quantity supplied generally responds positively to price, so the supply curve is upward-sloping.

(5) Elements other than the good’s price affect its supply. The most important influence is the commodity’s production cost, determined by the state of technology and by input prices. Other elements in supply include the prices of related goods, government policies, and special influences.

The claimed law – costs determine supply – is wrong: profit does.

Together: The difference between cost and price determines supply.

C. Equilibrium of Supply and Demand

(8) To use supply-and-demand analysis correctly, we must (a) distinguish a change in demand or supply (which produces a shift of a curve) from a change in the quantity demanded or supplied (which represents a movement along a curve); (b) hold other things constant, which requires distinguishing the impact of a change in a commodity’s price from the impact of changes in other influences; and (c) look always for the supply-and-demand equilibrium, which comes at the point where forces acting on price and quantity are in balance.

(9) Competitively determined prices ration the limited supply of goods among those who demand them.